The ‘Timmy’s in the Well’ study of dog-for-human empathy when it comes to dogs and humans, a 2018 study suggests that not only are they empathetic, but some dogs rush to the rescue when they believe their human is in distress.

The goal of the study — named for the little boy in the long-ago television series whose co-star was his loyal Collie, Lassie — was to test the theory that dogs have a “prosocial and empathetic nature.” Prosocial behavior is defined as positive, helpful, and intended to promote social acceptance and friendship.

The first experiment in the study, which was conducted by a team of university researchers, involved 34 privately owned dogs. Breeds included golden and Labrador retrievers, small dogs such as the Shih Tzu and Pug, and several mixed breeds. Sixteen of the dogs were registered therapy dogs.

The experiment was conceived by one of the study co-authors, Julia Meyers-Manor, Ph.D., an assistant professor of psychology at Ripon College. One day while playing with her kids, they buried her in pillows, so she began calling for help as part of the game.

“My husband didn’t come rescue me,” Meyers-Manor told Phys.org “but, within a few seconds, my collie had dug me out of the pillows. I knew that we had to do a study to test that more formally.”

The researchers positioned each owner, one at a time, behind a clear door held shut with magnets. The dogs could open the door by pushing on it, and they could clearly see and hear their humans. The researchers then asked each owner to either hum the song “Twinkle, Twinkle Little Star,” or pretend to cry.

The researchers wanted to see if the dogs would open the door more often and more quickly if their owner was crying than if they were acting normally. 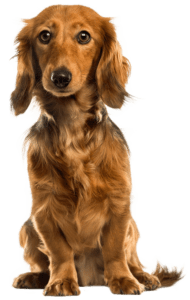 In addition, the stronger the bond between the dog and owner, which was measured by a separate gaze test, the more likely the dog was to rush in to help.

Their heart rates indicated the dogs who opened the door to “rescue” their human were actually less stressed than they were during baseline measurements. They were distressed by the sound of their owner’s cries, but not too upset to try to help them. This suggests that dogs who can overcome their own distress are more likely to jump into action.

The researchers also observed that the dogs who didn’t push open the door when their humans cried were probably so stressed and troubled that it hindered their ability to do anything.

According to lead study author Emily Sanford, a graduate student in psychological and brain sciences at Johns Hopkins University, the dogs’ behavior is similar to what is seen in children who need to help others. They are only able to offer help when they can overcome their own feelings of distress.

“It appears that adopting another’s emotional state through emotional contagion alone is not sufficient to motivate an empathetic helping response; otherwise, the most stressed dogs could have also opened the door,” Meyers-Manor told ScienceDaily.

“The extent of this empathetic response and under what conditions it can be elicited deserve further investigation, especially as it can improve our understanding of the shared evolutionary history of humans and dogs.”

Past research has found dogs to be very responsive to human crying, but this is the first study to show that dogs who detect emotional distress will hurry to do something about it.

“Dogs have been by the side of humans for tens of thousands of years and they’ve learned to read our social cues,” says Sanford. “Dog owners can tell that their dogs sense their feelings. Our findings reinforce that idea, and show that, like Lassie, dogs who know their people are in trouble might spring into action.”

The results of these studies, like many others on the mental and emotional lives of dogs, just confirm for those of us who adore them that our canine companions are intelligent, sensitive, loving creatures. But it’s always nice to have documented research to validate what we already know!