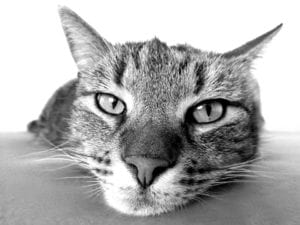 Myth — Cats are antisocial and don’t like cuddling with their humans — if you have a feline family member who is, shall we say, less than affectionate with you, rest assured you have lots of company. Interestingly, it often seems people who really want a lap cat wind up with a kitty who’d rather sit on hot coals, while people who’d prefer to admire kitty from across the room tend to attract little feline cling-ons!

No one’s entirely sure why some cats are social and affectionate, while others are distant and even cranky, but heredity seems to play a role. Some experts have observed that friendly feline parents tend to have friendly kittens, which could be a result of role modeling (nurture) or genetics (nature) or a combination.

It’s also well-established that early socialization and handling are important in shaping the personality and temperament of kittens. Kittens exposed to positive experiences with lots of different people, animals, unfamiliar cats, new environments and human handling during the critical developmental period of 8 to 15 weeks are more likely to be friendly and social adult cats.

They’re also better equipped to handle the everyday stresses of life, such as a change in their human’s work schedule, or the arrival of a new member of the household. If your cat is an adult and for reasons either known or mysterious doesn’t seem interested in being physically close to you, take a look at these five dos and don’ts for turning kitty into a cuddler.

Myth — Cats can be left on their own for days — Many people believe one of the advantages of having a cat versus a dog is that their independent nature allows them to be left on their own for long periods. But while its true cats don’t require as much hands-on attention as dogs do, it’s really not a good idea to leave your cat alone for long periods.

Number one, kibble, which is the only food that won’t spoil sitting out in the open for days, isn’t a nutritionally optimal, species-appropriate diet for cats. I never recommend dry pet food, and that goes double for kitties.

In addition, no matter the diet, many cats will gorge themselves, eating all the food within hours after you leave. Then they (often) throw up and have nothing to eat until you return. This is stressful for your cat, and can also endanger her health, since kitties need to eat every day.

An unattended, un-scooped, stinky litterbox is an invitation to your cat to find some other spot to relieve herself. And finally, in a worst-case scenario your cat could injure herself or become ill during your absence, and no one would know. I recommend asking a friend, relative, neighbor or professional pet sitter to stop by each day during your absence to feed and water your cat, scoop the litterbox and spend a few minutes with her to ensure she’s content and healthy.

Myth — Cats allowed to roam freely outdoors are healthier — Actually, according to the results of a recent study (and plain old common sense), outdoor cats are three times as likely to contract infectious parasites as indoor cats. Beyond parasites and infectious diseases, free-roaming kitties face many other threats, including moving vehicles, predators and cruel humans.

If you want your cat to remain healthy, with a nice long lifespan, she should live exclusively indoors, with supervised trips outside. While being indoors all the time isn’t what most cats would choose, it’s by far the safest life we can choose for them. Indoor living isn’t an entirely natural environment for your cat but letting him run around loose outside presents much more risk than keeping him “captive” in your home.

However, just because your kitty lives inside doesn’t mean he can’t go on supervised visits outside to bask in the sun, exercise and ground himself on a daily basis, if he chooses. Outdoor adventures in good weather are wonderful for cats and I believe going outside daily does extend lifespan, as long as they’re safe.

Some folks recommend walking your cat in nice weather using a harness. This gets him out into the fresh air, stimulates his senses and gets his paws in direct contact with the ground. An alternative is a safe, fully enclosed cat container that prevents him from getting out and other animals from getting in, and he can choose how much time he wants to spend outside on a daily basis.

Myth — it’s dangerous for pregnant women to be around cats — Expectant moms continue to receive advice from the well-intentioned but misguided to get rid of their beloved pets to avoid contracting a toxoplasmosis infection.

This persistent misconception gives feline companions an undeserved bad rap, and worse, it can potentially cause expectant parents to relinquish their kitties to shelters. Toxoplasmosis is caused by the Toxoplasma gondii parasite, which is found in a variety of birds and mammals. However, T. gondii can only reproduce inside the bodies of cats, which are the only known host.

Estimates are that about 30% of cats and dogs in the U.S. have been exposed to the parasite, and according to the Centers for Disease Control (CDC), more than 60 million people in the U.S. may be infected with the parasite.

Fortunately, people with healthy immune systems experience only mild symptoms, if any, from the infection. However, during pregnancy, toxoplasmosis can cause miscarriage, stillbirth and severe eye and nervous system problems in the baby. It’s worth noting that If you’ve been infected by the parasite in the past, repeat exposure during pregnancy won’t cause a problem.2 You can even get tested for exposure as soon as you learn you’re pregnant to know how concerned you need to be.

While toxoplasmosis can be devastating to women who are pregnant, employing a few commonsense precautions is all that’s required to stay safe. I have always reassured my pregnant clients that there’s absolutely no need to give up feline family members as long as they follow a commonsense protocol in caring for their pets and themselves while pregnant.

Myth — Declawing is a just a harmless “permanent nail trim” — I’m not sure who came up with the term declawing, because it’s quite misleading. The procedure should be called “de-toeing,” not declawing, because declawing implies only a cat’s claws are permanently removed. However, it’s impossible to remove the claws without amputating a portion of each toe.

More specifically, declawing isn’t a nail trim or even nail removal. It’s amputation of the claw, bones, nerves, the joint capsule, collateral ligaments and the extensor or flexor tendons.

A front-paw declaw requires 10 separate amputations. If the hind paws are also done, that’s eight more separate amputations. Fortunately, hind paw declawing is much less common, but also considerably more painful for the cat. According to feline specialist Dr. Jean Hofve, declawing is so painful it is the procedure of choice to test new pain medications for cats. Believe it or not, everyone in the veterinary community under­stands it’s a more painful procedure than spaying or neutering.

In addition to the mutilation of their toes, cats must use their paws to bear weight, which makes sitting up, and especially standing and walking, torturous. Most cats are sent home with just two or three days of pain medication. As we know, kitties hide pain exceptionally well, so while they may seem fine, the pain of declawing is still with them for much longer than a quick 48 hours.

Declawing can also create chronic, severe pain in a number of ways, and cats, being stoic, deal with it. They appear normal. They may even get back to playing. They may “pretend” to scratch with their missing front claws. They may climb and jump, but none of it is normal movement because declawing has altered their entire physiology. Their biomechanics have changed, and down the road, behav­ioral problems can arise.

There are immediate and obvious behavior changes in about a third of declawed cats, like biting and eliminating outside the litterbox. But there are also mental and emotional problems that can develop. Lots of owners of declawed cats report that their pet has become depressed, withdrawn, irritable and even aggressive after being declawed.

Of course, this is to be expected if every step a cat takes causes pain. And while owners may not associate the behavior change with pain because cats are stoic, pain is usually the cause of it.

The good news is the majority of housecats these days aren’t undergoing brutal toe amputations. The not-so-good news is that unless you take steps to prevent it, those sharp little claws can do big-time damage to your furniture, carpets, drapes and other surfaces around your home.