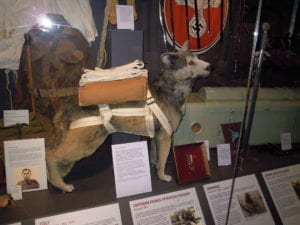 Brian was a tough paratrooper. He trained hard for his deployment with the British Army during . During his training, he learned how to identify minefields. Then, on the battlefield, he protected his comrades-in-arms — though not all of them made it back. On D-Day, he parachuted under heavy anti-aircraft fire onto the Continent. He was there when the Allies liberated Normandy. A few months before the war’s end, he parachuted into western Germany, from where he marched to the Baltic Sea.

Less than two years after the war, Brian was given an award to recognize his “conspicuous gallantry.” But the bronze medal was not the only thing that distinguished this special soldier from the majority of his comrades: Brian, the tough paratrooper, was a dog, a young Alsatian-Collie mix.

During World War II, the 13th (Lancashire) Parachute Battalion started an adventurous experiment as it prepared for D-Day: enlisting dogs into their ranks. The so-called “paradogs” (short for “parachuting dogs”) were specifically trained to perform tasks such as locating mines, keeping watch and warning about enemies. As a side job, they also served as something of a mascot for the two-legged troops.

Andrew Woolhouse, an amateur historian, surmises that the battalion first got the dog in early 1944 because Lance Cpl. Ken Bailey “had a veterinary background.” Woolhouse researched the battalion for five years and gathered the writings of a number of battalion members from both before and after D-Day to help him write a batallion history “13 – Lucky for Some: The History of the 13th (Lancashire) Parachute Battalion,” published this year.

At the time, Bailey had been assigned to run the “War Dog Training School” in Hertfordshire. In 1941, the British War Office had made radio appeals for dog-owners to lend their pets to the war effort. This led to the first batch of animals at the training school — though the sheer number of people trying to get rid of their dogs during the war soon made it somewhat of a shelter.

Among these animals was the 2-year-old dog Brian. In Jan. 1944, Bailey wrote in his notebook: “One of the dogs selected from the training school in Hertfordshire was ‘Bing’ a 2 year old Alsatian-Collie cross. Bing had been called Brian by his civilian owner, Betty Fetch, and was the smallest of his litter and due to wartime rationing he was given up.”

In addition to Brian, now called Bing, Bailey took two other dogs into training: Monty and Ranee, both Alsatians (also known as German shepherds). These three would number among Britain’s paradogs during the war, with Ranee being the only female parachuting dog in the war. 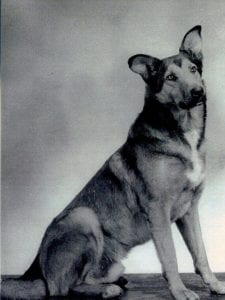 Training began with getting the dogs used to loud noises. At the base in Larkhill Garrison, the dog handlers had the dogs sit for hours on transport aircraft with their propellers spinning. They also trained the dogs to identify the smell of explosives and gunpowder in addition to familiarizing them with possible battlefield scenarios, such as what to do if their master was captured, how to track down enemy soldiers and how to behave during firefights.

Training on the ground lasted roughly two months. But then the dogs started what wasn’t part of the training of the other search dogs in the war: parachuting maneuvers.

The dogs’ slim bodies proved to be advantageous because, during their test jumps, they could use the parachutes that had actually been designed to carry bicycles. In order to make it easier to get the dogs to jump out of the aircraft, they weren’t given anything to drink or eat beforehand. On April 2, 1944, Bailey wrote in his notebook about the first jump with the female Alsatian Ranee. He notes that he carried with him a 2-pound piece of meat, and that the dog sat at his heels eagerly watching as the men at the front of the line jumped out of the plane.

Then it was their time to jump, which Bailey describes in this way:

“After my chute developed, I turned to face the line of flight; the dog was 30 yards away and slightly above. The chute had opened and was oscillating slightly. (Ranee) looked somewhat bewildered but showed no sign of fear. I called out and she immediately turned in my direction and wagged her tail vigorously. The dog touched down 80 feet before I landed. She was completely relaxed, making no attempt to anticipate or resist the landing, rolled over once, scrambled to her feet and stood looking round. I landed 40 feet from her and immediately ran to her, released her and gave her the feed.”

Jump, land, eat: With each training jump, the dogs started enjoying their job more. In fact, the dogs sometimes allowed themselves to be thrown out of the planes or lept out without any coaxing.

Problems with the Plan

Then came the day that the dogs had trained for, D-Day, June 6, 1944: The three planes carrying the members of the 13th Battalion took off at 11:30 p.m. on the previous night and headed for France. At 1:10 a.m., or only 30 seconds behind schedule, the airplanes reached Normandy. Each plane held 20 men and one dog.

Everything seemed to be going according to plan until the hatch was opened. The planes were surrounded by bangs and whizzes, and loud salvos of flak threw yellow light onto the gray clouds.

Bailey and Bing flew on the same airplane and were the last ones in line to jump. But after Bailey boldly sprang out of the hatch, his four-legged pupil turned around and holed up in the back of the aircraft.

In battalion records, it says that the jump master on board, who was responsible for coordinating the jump, was forced to unplug his radio equipment, catch the dog and toss him out of the plane.

What’s more, Bing’s jump reportedly didn’t go as smoothly as his training jumps had: Shortly before setting his four feet on the soil of occupied Europe, Bing was hanging in the branches of the tree his parachute had got caught in. He then had to wait for two hours until his comrades found him with two deep cuts in his face, most likely from German mortar fire.

Honors for the Hound Turned Hero 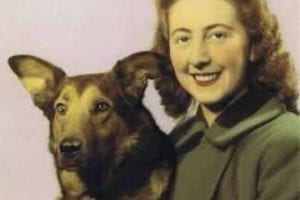 In what followed, as one soldier in the 13th Battalion later noted, Bing and the other dogs proved to be very useful, especially for locating mines and booby traps. “They would sniff excitedly over it for a few seconds and then sit down looking back at the handler with a quaint mixture of smugness and expectancy,” he wrote, noting that the dogs would then be rewarded with a treat. “The dogs also helped on patrols by sniffing out enemy positions and personnel, hence saving many Allied lives,” he added.

However, in addition to being saviors, the dogs were also victims. Monty was severely wounded on D-Day, while Ranee was separated from her battalion shortly after landing in Normandy and never seen again. But they were later replaced by two German shepherds who had switched sides and soon became friends with Bing.

Bing survived the war and went on to receive the Dicken Medal, the UK’s highest honor for animals that have displayed “conspicuous gallantry or devotion to duty while serving with any branch of the Armed Forces or Civil Defence Units.” The medals are awarded by the People’s Dispensary for Sick Animals, a British veterinary charity, and have been bestowed on dogs, pigeons, horses and a cat (for getting rid of rats on a naval ship despite injury).

But that was not the last honor for Bing’s service: When he died in 1955, the former paradog was buried in a cemetery of honor for animals northeast of London. Today, one can also find a true-to-life replica of this four-legged hero in the Parachute Regiment and Airborne Forces Museum in Duxford. He is naturally shown wearing his parachute and next to his medal of honor, which bears the words “For Gallantry” and “We Also Serve.”